Walsall Health marked the passing of their late captain, team mate and friend Tim Oliver with a record-breaking win at Lapworth which, it is generally agreed, he would have ABSOLUTELY loved.

Sam Stephens – an immense performance with both bat and ball.

Without a shadow of a doubt the highlight was a devastating performance by Sam Stephens with both the bat and the ball. Sam first knocked 61 on a pitch that was far from conducive to run scoring before duly ripping apart the Lapworth top order with a spell of delicious bowling that saw him end with figures of four wickets for five runs.

The Elf welcomed overseas player Jeremy Brady to the ranks (his Peaky Blinders-style headwear immediately helped win over his new team-mates) while Gareth Preece made his first appearance for a couple of years due to an exile in the Australian Penal Colony meaning three Preece Brothers lined up for the historic game.

The worst Welsh Bee Gees tribute EVER – the Preece Brothers Gareth, John and Dave together at last.

The Preece Brothers (Gareth and Dave) opened the batting on a track that began in stubborn fashion. While Dave (still suffering from his stag do the previous evening) ground out nine, Gareth soon rediscovered his touch with the bat and added an impressive 23.

The mysterious absence of Stuart Slater from the line-up was soon explained by the sign at the Lapworth club house.

But it was Sam Stephens’ input that really laid the foundations, his score of 61 an impressive array of shots on a slow track and even slower outfield. His cause was helped no end by Andy Gorton – fresh from his spell with IPL Franchise Goa Geriatrics – whose wily use of sweep-shots helped build the total to a competitive one.

A useful partnership by Hewlitt and Danks built things even further before an important cameo by Brady at the end (and a monster six by Hewlitt, the only six of the game) helped The Elf to a total of 183. 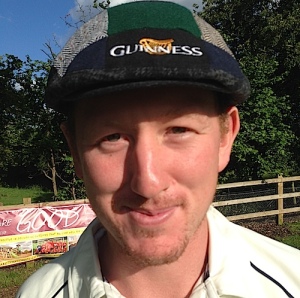 Jeremy Brady – overseas Kiwi export made an excellent dayboo for The Elf.

Lapworth’s response immediately hit the rocks with Sam Stephens shattering the stumps of Favre for just two in his first over.

Fellow opening bowler Gareth Preece (recovering quickly from an almost decapitating first ball) soon snared the wicket of the other opener McCormick, thanks to an accomplished catch by Hewlitt.

Sam then saw off Wright and McCluskey with two absolute beauties before it was the turn of Stephens Senior to get in on the act, first clean bowling Seeley for six and then tempting Clarke to nudge one up in the air to the dependable hands of Chris Hall.

Hall himself got the wicket his brilliant spell deserved when Winter tried to drive him onto to find Gareth Preece at mid-off.

It was left to the devastating force of Ian Chuck to see off the last residual threat offered by Lapworth, taking both Stephenson and McCormick for ducks leaving the home side with a total of just 28.

Today’s game was a fitting tribute to our late colleague who would have enjoyed the controversy (a couple of glaring decisions didn’t go our way) but most of all the spirit and energy shown by The Elf.

Tim, that one was for you.

Man of the match: Sam Stephens

Rachel Hangover Rating: 0/10 (Shocking effort. Rubbish. She could walk in a straight line and touch her nose at the same time and EVERYTHING. The only thing is that we know she is going to be back with a vengeance before long)