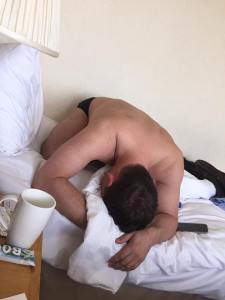 The moment Slates realised he can’t take his chopper.

After dismissing our long standing rivals 2-1 in a 3 game series last season, The Elf visited Himley on a warm but breezy Sunday afternoon hoping to continue in the same form.

Slater & Wright had raced back up the M40 from a night out in London after discovering there was no helipad for Slaters chopper!

The game started with the Walsall Health batting. And Highwood only fielding 9 players waiting for 2 late arrivals. And unfortunately that spelt the end for Super Andy Gorton who chipped in with 8. Flustered by a missing score book on arrival he went for a boundary walk and to clear his head. Some may say disturbed by a picture that he saw earlier that morning. 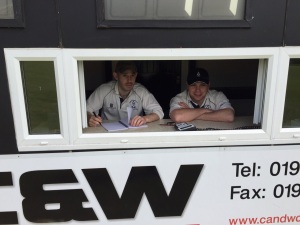 Skipper & Fell in the score box before fell inadvertently trying to destroy it.

Gareth Preece played a fine innings getting a tidy 44 with an extensive selection of fine shots and rapid running between the wickets. While Rich Fell unfortunate not to make a 50 falling just short. The highlight being a massive 6 that hit the scoring hut.

The Skipper, Dave Preece, rediscovering the form of last season that saw back to back centuries making a fine 74 n.o. And let’s take a moment to acknowledge a very sexy reverse sweep for 4. And at the other end Vice Skipper Rob Hewlett, kept us in suspense, leaving it until the very last ball to grab his 50. Inspirational leadership all round.

Bowling was opened by Iron Man Chris Hall and Nathan ‘Wonderland’ Martin. And while their opening left hander set out his stall and batted well wickets tumbled for Martin, supported by his on looking grandparents who must have been very proud of his efforts.

Ian Chuck bowling pace rather than spin today also got his rewards, inspired by a chicken-esque warm up, The Elfs current player of the year, showed that he truly is an all rounder.

C Hall returned for a second spell and took a heavy blow to the hand. And it would later be confirmed that he had a broken finger. But in true Iron Man style he finished the game going on to get a wicket with a broken finger and field manfully putting other body parts on the line. Cool under pain and pressure. Is it now ‘Ice Man’ for the Elfs premium strike bowler.

6 time Fielder of the Year, Richard Fell. (yes 6 time) is no stranger himself to a broken finger. And in this game he put his own body on the line making several stops that were both brave and painful in equal measure.

Number of catches appear to be the measure of success though and when it comes to being in the right place at the right time and then of course holding on to it no one seems to be better than Rob Hewlett. Mr Tickle and his hyper-extension always make it look easy.

The pesky left handed finally fell on 49 just short of his 50 to the spin bowling of Matt Wright. Thanks to the batsman falling over and The Gort doing what he does best, whipping the bails off.

The pocket Dynamo Nathan Reeves today was lightning at mid wicket strangling singles and did well to contain the anger on the boundary with only a minor flounce!

Gareth Preece battled through the pain also with a pulled muscle. Treating the ladies on the sidelines as he dropped his trousers to apply some heat treatment but more of that later.

A little bowling cameo from The Elfs International playboy Stuart Slater saw off the dangerous Shaun Allsop for a comprehensive win. The slinging Slater forced the Highwood Park rear guard to dolly one to Wright for the catch. All out for 119.

Back to winning by over 100 runs. A great team performance and effort from the team.

TOP BATSMAN
Take your pick today. Some real solid knocks but it’s hard to over look Our Glorious Leader DP who was on top form.

TOP FIELDER
6 Time Rich Fell. Big, bold, brave.
Hewlett v Fell clearly fighting it out for the title they both want to make their own.

RACHEL GORTON’S – POP SCENE
It’s an away match so the beverage pouring pretty one was off duty today. (Mousse Free) yet wrapped up at times like a Halfords Lane veteran, just missing the thermos flask.

Remaining remarkably calm when a cricket ball was hit off her little FiFi Fiat.

Lots of rushing to the aid of all the injured parties with a magic rub. Products are available to all the team to aid the prowess and performance. Might help their cricket too. At reasonable rates from the Forever Range.

DAI WATCH
Missed in the scorers hut. All the elf have been hearing of JP’s progress and recovery from his surgery and we all hope to see you both very soon. 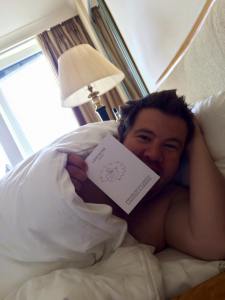