Our first visit to the village of Swynnerton in Staffordshire proved to be a memorable one for a certain young WHCC player, who since making his debut in 2005 had always shown the potential to produce a special performance. It was on this day, that the potential was fulfilled.

The team that travelled up the M6 that day… Richard Fell (Capt) Andy Gorton. Dave Stephens. Sam Stephens. Nathan Reeves. Tim Oliver. Adam Smith. Mike Sayers. Chris Hall. Frank Jacob and John Nicholls arrived at one of the more picturesque grounds we have played in. At first glance, the opposition looked useful. One of those clubs who had four teams on a Saturday, and a strong youth policy. The type of opposition you just quietly thought to yourself…this could be a long day.

With Swynnerton electing to bat first, on a warm sunny day, the early analysis of our opponents proved to be pretty accurate. All our bowlers tried their best, encouraged as ever by Captain Rich Fell, but on a fast outfield and a nice batting track, the runs flowed at a good pace for the home side. Opener Hubbart was particularly dominant, blasting 61 before becoming yet another victim of the Caught Fell…Bowled Hall combination. After Frank, Tim and Sam all picked up a wicket each, we took a second drinks break at the 30 over mark, with Swynnerton going well on 196-4. At this point, a conversation that took place between two opposing players may well have been the turning point of the game.

Just before the last drop of orange squash was consumed, the Swynnerton Captain approached Dave Stephens with the offer of declaring their innings at 196. Maybe a little bit of over-confidence, arrogance, or taking victory for granted, we will never know. But Dave took approximately 0.0001 secs to consider the offer, before responding, “No thanks, we will carry on and bowl our full 40 overs” Swynnerton, who looked well set to post a score in excess of 260 were pegged right back in those final ten overs, only scoring another 39 runs to reach 235-7. Ironically, it was Dave who bowled the Swynnerton Captain for 53, blunting any hopes of posting a bigger total. It was a typical Elf fightback, which gave us renewed hope of an unlikely victory.

After a lovely tea, which included scones, clotted cream and jam, we still believed if someone played a big innings it was possible to chase down 235. Gort (25) and Dave Stephens (1) opened the batting. But the whole match was really all about one innings and one partnership……At 50-2, Mike Sayers joined Sam Stephens who was already threatening to take complete charge of the Swynnerton bowlers. The posh electronic scorebox over the far side of the ground was about to endure a busy afternoon.

This was one of the best partnerships ever seen. Mike Sayers, using the see ball-hit ball technique, 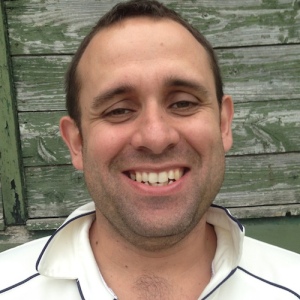 playing the supporting role to Sam, hitting 43 off 41 balls. It is fair to say, that Sayers and Stephens sounds an unlikely combination, but the two men just complimented each other from ball one. It didn’t take very long for Sam to approach that tricky moment in a young cricketers career….the first time in the 90’s. Sam’s innings had been so fluent, with boundaries racing to all four corners of the ground. By now, a lot of nervous pacing up and down from his team mates could be seen, as his score reached 94. Just to add to the tension of the occasion, Dave was umpiring at this time, no doubt, quietly willing his son to reach a well deserved personal milestone. We didn’t have too long to wait.

It took just one more ball for Sam to make his maiden 100. Taking the brave mans route, with a straight six, back over the bowlers head, disappearing well over the sight screen to the delight of all his team mates. A great moment, with Dad…Dave, being the first man to shake Sam’s hand. The only time any WHCC player has gone from 94 to 100 with a six.  It was also the fastest century we had ever seen. After some scorebook examination it looks like it took just 85 balls.  Plus a match winning partnership of 147 with Mike Sayers coming in just 18 overs. Two remarkable performances. Sam finally departed for 109 off 91 balls, but the two men had broken the spirit of Swynnerton, who earlier in the day, didn’t believe we could chase down a big total.

It was left to Tim Oliver and Nathan Reeves to score the remaining runs to close out a memorable victory, which they did with 3 overs to spare. Thank goodness we never took the declaration offer, is all I can say.

Our facebook page had just been created in this year, so here are a few quotes from Sam and Mike’s team mates in the hours that followed….

Andy Gorton…”Sam, awesome today mate. Today you came of age as a cricketer. This is a day you will never forget. Well done mate”

Richard Fell…”Echoed mate. Brilliant from you and Mike”

Chris Hall…”Sam and Mike, you will be required to do interviews with 5 live, Talksport, Sky Sports and Loose Women”

Kerry Gorton…”Haha, Loose Women, they would eat you lot alive”

This was to be the only time we ever defeated Swynnerton who we last played in 2015. A strong club with plenty of talent, who simply came up against a WHCC player at the top of his game on that day in 2011. It is worth mentioning that just 2 week earlier, against Lapworth, Sam had been run out by Mo Arshad for 66, when looking well set to get to three figures. I seem to remember a few people giving the dressing room a wide berth in the moments that followed. But just a fortnight later, both Sam and Mike hit their highest individual scores for the club to win us another memorable game of cricket.

Mike Sayers still makes the odd appearance from time to time, and became well known for his whole hearted fielding, charging around the outfield to save precious runs. Mike deservedly won our Fielder of the Year Award in 2012. His approach to batting was always the same…take a big swing, hit the ball as hard as I can, and see what happens. A M.Sayers innings was always entertaining to watch. 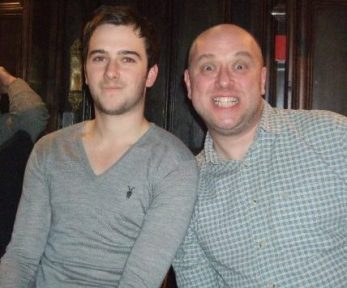 Sam continued to play regularly for WHCC up until the 2015 season. Chalking up over 2,000 runs, including two 100’s and eleven 50’s. Sam has also taken over 100 wickets, to join his Dad Dave, in completing that rare double of 1,000 runs and 100 wkts. Since moving to Derbyshire, Sam has continued to play to a high standard for both Spondon and Darley Abbey. But I reckon if you ask him when his Graduation Day was at the School of Cricket, he would say…..Swynnerton. July 3rd. 2011.