With all competitors kitted out in festive jumpers and headwear (with everyone particularly impressed with Hewlitt Jr’s Sunderland hat), some bookies were speculating that the Welsh Wizard could complete a historic double of both trophies.

It was fair to say that Ed Sherran and Michael McIntyre had let themselves go a bit over Christmas.

As it was, Matt Wright overcame the field at Star City with a superb round of 87 across the two courses in his first appearance in a WHCC golf tournament, etching his name on the trophy alongside Rob Hewlitt, Nathan Martin and Tom Davies. 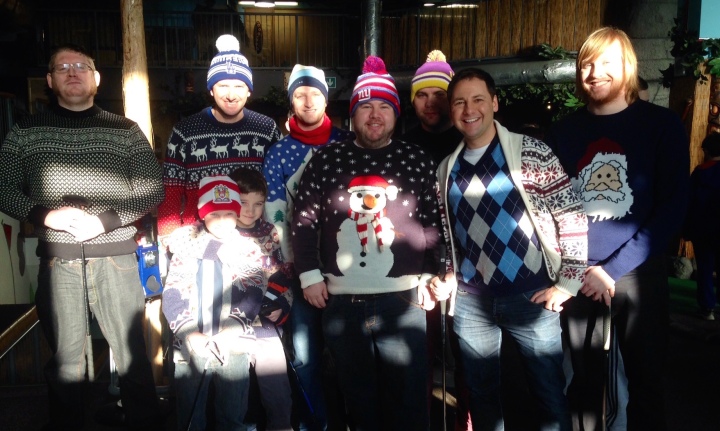 This put our hero two shots ahead of joint second placed Rich Fell and Tom Davies (both on 89) followed by Ian Chuck on 90.

Slates forgets to breathe in as Andy Gorton begins to feel the pace of keeping up with the young uns.

Sojourning to the New Talbot in West Bromwich, the gallant troops continued to showcase their sporting prowess, overcoming a less than punctilious approach to catering by the kitchen staff that saw Matt Wright come perilously close to slipping into a hunger-induced coma.

Mat Danks – in his first ever games of darts – saw off experienced players Rich Fell and Nathan Martin to win his group after a sudden death shoot out to win a group also featuring Ian Chuck.

Meanwhile, Charlie and Freddie Hewlitt dominated their group with the former ousting his brother, Andy Gorton and Stuart Slater to go through to the final.

And in the third group, Tom Davies swatted aside Shannon Simmonds, Nathan Martin and Matt Wright to secure his spot.

Davies made short work of the final, winning in some style in the three-way clash to secure the trophy for the valleys.

With such an impressive turn-out (in addition to a pretty great get together the previous night to say hello to Steve Fell during a festive return from the Iberian peninsula), it’s probably fair to say the lifeblood of The Elf is alive and well.

Let it also be said that in small huddles during the day hushed and excited chatter was turning already to next season and our hopes, dreams and aspirations….

It could be a blinder.