Batsman and bowler extraordinaire Ian Chuck was the big winner as The Golden Generation celebrated a tremendous 2014 season at the Lyndon House Hotel in Walsall.

Chuckie, who was devastating with both bat and ball all season and enjoyed a crescendo that saw him finish the season with his first century, was awarded the trophy by new Elf chairman Rick Jarrams.

Skipper Dave Preece said: “2014 was the season when Chuckie became the player we all knew he could become.

“He has always been an amazing bowler but this year his batting improved tremendously and he has been instrumental in the club’s success this year.”

Preece himself won the batsman of the year having pillaged more than 450 runs this season including record-breaking back to back centuries.

The Bowler of the Year trophy – now named in honour of Tim Oliver – was fittingly won by Chris Hall whose season – despite being interrupted by illness – was littered with devastating bowling performances. 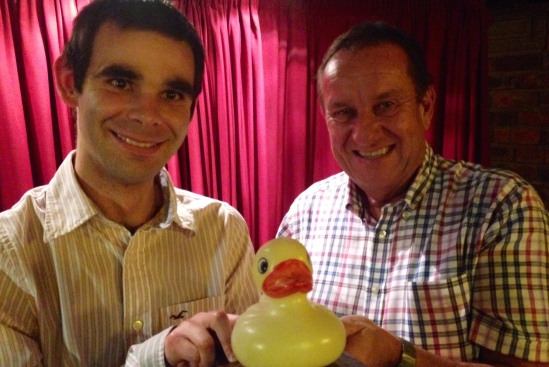 Rob Hewlitt took another step closer to holding the record for most wins of the Fielder of the Year trophy after another brilliant year in the field.

Clubman of the year was won by Mat Danks for his efforts with the club’s website and promotions and Jonathan Preece proved he was the ultimate team player, winning the Duck Trophy after losing his wicket trying to get Chris Hall his first half century.

Club legend John Nicholls received a trophy for taking 250 wickets for The Elf during an illustrious career with the club.

The coveted Brian Stuart Dressing Room award for most iconic moment of the season went to Nathan Martin who – it has been mentioned – threw his bat in a tree during a game against Lichfield Nomads.

The legends, players and fans also enjoyed the premiere of the Walsall Health 2014 movie which you can watch here.

Nathan Martin – famously threw his bat in the tree.

Clubman of the Year: Mat Danks

One thought on “Chuck rules the roost as player of the year at The Elf P.U.”