The Elf travelled down to rural Warwickshire for their third game of the season, their second as visitors on what was a ‘day after the day before’ for a few of the regulars after spending the previous 24 hours in Headlingley watching the mighty England.

A few old faces returned to the sides for their season debuts in Sam Stephens and Nathan Reeves.
Captain Hewlitt was third time lucky whilst tossing today and he correctly called and decided to bat first. Music to the ears to The Elf’s tail who were still sobering up from their day at the test.

Usual opening pair Chuck and Gorton strode out to the middle and had to face one of the better opening partnerships they would have ever faced.
Gorton was the first to go for 8 but a decent 35 run opening stand was good effort against some top bowling.
Sam Stephens was in at three but was bowled by the impressive Winters for a solitary run.
Nathan Reeves, fresh from military service hit a few lusty blows to the boundary but did  went AWOL on 8.
Captain Hewlitt survived a couple of decent deliveries from first change bowler McCormick but eventually played on for two.
Dave Stephens was in at six and there were claims of child abuse when Stephens cashed in to the Lapworth youngster Dean’s bowling but was bowled by the impressive McCormick for 16.

In at seven was Elf suerman Greg Phillpott. Having already impressed with ball and with his excellent fielding (as well as being a tall dark and handsome good looking *expletive*) Philpott produced a top knock in the midst of chaos and put on an great sixth wicket partnership with Chuck of 88 to ready steady the ship for The Elf. Philpott went with the score on 171 after getting 28 himself, his first for the club.

Nathan Martin was next in and he and Chuck put on 29 to get the score exactly on 200 by the time Chuck was excellently caught by the Lapworth youngster Dean, who will remember that catch for a long time.
Like all good partnerships, when one partner leaves, so does the other. Martin fresh from doing the job as a barman the day before and clearing a table of drinks (by falling through it) was bowled for seven.
After a long tea/rain delay the Elf were back on and JP was soon to fall for a duck. Tom Davies and Matt Wright put on 15 for the last wicket until Wright was bowled by Batti for 9.

With 215 to chase, the hosts were straight out of the blocks with opener Arnold hitting the first three balls the boundary for 4. This was a sign of things to come as with other opener Winters Lapworth looked like they would be home in time for Songs of Praise but a shining light in their way Sam Stephens, had other ideas.
On at first change, Stephens bowled a great away swinger to Arnold who knicked off to Gort and the Elf were on their way. At this point the Elf had Lapworth 72-1 after nine overs.
Nathan Martin came back on and after a few expletives produced a quality over in which he got three wickets from 4 balls in a treble wicket maiden. Double dangles all around in fines after for a fine spell in which Martin took 4-55 after being blitzed by Arnold (which there was no shame of) early doors.
Dave Stephens got in on the act and produced a full length ‘Jonty Rhodes esque’ attempt at a catch but was not to be. Stephens finished his eight overs 3-30.
In what was a mini collapse for Lapworth having been 71-0 to 128 all out. Wright and Davies came on and took a wicket each.

The Elf celebrated their first of hopefully many wins of the season in what at one stage looked as though it would not happen. A really good team effort from all concerned.

Man of the match – Ian Chuck for his first ton of the season for the Elf.

Dai Watch – Dai this week did not keep score in hut which was a good 3 miles from the pavilion, he instead chose to be sociable and score with the team which upset a few locals. Well done Dai. (I think he wanted to be closer to the sheep who were incredibly close to his vantage point in the first innings…true Welshman!)

AOB –  Dave Stephen’s signal for the five penalty runs was like something out of Flashdance. A joy to behold. 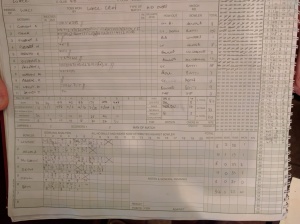