The Elf suffered their first loss to Highwood Park since before 2014 in a low scoring affair in Aldridge.

Playing their first game of July, stand in skipper for the day, Dave Stephens lost the toss and was asked to bat by his opposing number.

Usual opener Ian Chuck was joined by Nathan Martin or ‘Larkin’ as he is now affectionately called by his team mates. Chuck and Nath put on a decent opening stand of 38 before Larkin was caught at a deepish mid on for 13.

Chuck was then joined by his more common opening partner, Andy Gorton, fresh from a three day golfing weekend, Gort was looking to tee off against a more familiar bowling attack. Unfortunately, this was not to be. Gort was caught behind off the bowling of Holiday for 6 which started a magnificent batting collapse similar to England in the 1990s you might add.

Nathan Reeves who was in and out ‘oke coke’ style, he hit his second ball for two but was bowled by his third. Chuck was next to go, he was triggered by Larkin for 34 even though the Kolpak player was adamant he hit it. Surprisingly though, there were no fireworks in the changing room after and Chuck seemed relatively calm after being given out.

Next in on debut was new recruit Andy Carrick. A strange choice as he is not from the Rob Hewlitt talent pool but recruited by Tom Davies down the pub. Carrick, a true Yorkshireman played some excellent shots for no reward and tamely chipped Holiday to mid off for 2 on debut. Two ducks then followed. Firstly, Chris Hall for a rare ‘quack’ trapped in front by Holiday. Shortly after, Greg Philpott notched his third duck of the season when he was bowled by Perks.

Having been 61-1, the Elf were 68-7 and soon were 69-8 (way out of Stuart Slater territory) when JP was bowled for 1. Skipper for the day Dave Stephens was next to go with the score on 75 for 6, leaving him 22 short of his 1,000th run for The Elf. Matt Wright and Tom Davies put on 24 for the last wicket which included 5 boundaries. This was the second highest partnership of the game which summed up the Elf’s performance when your number 10 is also your second highest run scorer.

With only a feeble target to chase, Stephens and Davies opened but the skipper soon took himself off for Hall after getting harsh treatment by Holiday in his second over. Davies at the other end was not getting such bad luck, in his opening spell he picked up 2 wickets off his 5 overs for only 4 runs.

The moment the match could have turned the game around but it didn’t. It happened at the other end when Hall thought for all money he had trapped Smith plumb in front on a duck which would have had Highwood Park 30-3 and on the ropes but the one person that mattered did not raise his finger.

Even the opposing players after the game suggested it was plumb. Unfortunately with no DRS at such village level, Hall had to take his medicine which hardly seemed fair for such a good delivery.

Hall did eventually get Smith for 19 from a good catch by Philpott at mid on but the score had progressed well into the 50s and the situation looked bleak. Nath Martin also bowled but has now overtaken Davies as the most unlucky bowler in the side, his four overs going for 15 and no reward.

The next two bowlers brought in by Stephens managed to pick up a wicket. Carrick on debut bowled a couple of pies before finally the Elf got an LBW, when the same umpire raised his finger, this time the score on 93 and only 7 to record victory.

This didn’t happen before Wright picked up Hutton for a duck, a nice take from behind the stumps by Andy Gorton.

A bit of a damp squib in the end for The Elf, who would have backed themselves to be victorious. All credit to the visitors who bowled superbly on an awkward track, especially Holiday who went through his 8 overs five for thirteen.

Man of the match – Tom Davies 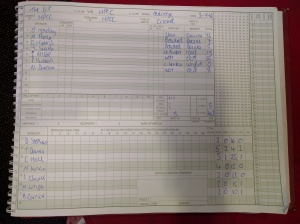