On a breezy afternoon, Highwood Park welcomed The Elf to Himley, for a fixture that was first played back in August 2005 and has been an ever present part of our fixture list since then. So it was fitting, that a man who played in that first game, was still here today, to play his 200th game for the club. And like so many times before, kindly stepped up to hastily arrange us the game, after Willow cried off for the 57th time. A big hand to Andy Gorton, for all his efforts over the years, both on and off the pitch, the other 8 players that turned out for the game, were determined to give Gort a memorable match.

Captain Ian Chuck, won the toss and elected to bat, on a decent looking wicket. It was a steady start from Gort and Chuck. Both men mindful that we were effectively starting the innings 0-2. Highwood bowled some tight lines early on, and were lively in the field, keeping the pressure on for the first 20 overs.

After another 50 partnership between the two openers, Gort departed for 28, followed by Alex Nunns who was trying to force the pace after drinks. We needed to increase the run rate. No better man for that job than Nathan Reeves. Looking more confident than in recent weeks, Nath smashed three 4’s, and scurried a rapid 3 in a hand time of 0.32 secs. His quickfire 19, gave the innings the impetus it needed.

With the score past the 100 hundred mark, Chuck registered his 4th consecutive 50 plus knock. Another club record.  In doing so, passing the 300 run mark for the season. When Chuck was out, enter Greg Philpott, who employed the see ball-hit ball tactics. Plundering four 4’s and a career best 38 not out, well supported by Nathan Martin, we finished up on 161. A score we felt would be competitive.

After being introduced to post war rationing at Peopleton last week, the Highwood boys supplied the best tea of the season. Plenty for everyone, and a good selection that we all appreciated. Even Dan Armstrong’s stomach was soundly defeated by the feast that was made for the players.

With tea nicely digested, Captain Chuck unleashed Dan Armstrong, and Nathan Martin on the Highwood openers. It was Chuck who struck the first blow, running out the luckless Olly with a direct hit. Then, Nathan Martin continued his imperious form, with a “ball of the century standard” delivery, to clean up Ralphs. Trudging off the pitch, Ralphy proclaimed..”I couldn’t have hit that with 2 bats”

Dan Armstrong had listened to mentor Chris Hall, adopting the mentality that charity only belongs at Dr Barnados, certainly not on a cricket field. Even having the audacity to predict to Hall, when he would bowl an off cutter to bag his first wicket. The opening bowlers did a superb job for the team. Then when Chuck got the dangerous Nai Duncan, it looked like we were in the ascendancy.

Chris Hall came on and continued to apply the pressure, getting Craig, who was caught by another Nathan Martin catch. A one handed nonchalant grab. His 5th of the season. But then Captain, Shaun Allsopp and M.Turner joined forces and began to steady the Highwood ship. From a precarious position of 50-6, the two batsmen batted cleverly. Always looking to expose the gaps in the 9 man field, and steadily increasing the run rate, picking off any short balls that came their way. JP and Alex Nunns tried to break the deadlock, but the two batsmen were giving no chances.

With Shaun reaching a classy 50, the game seemed to be slipping away, Highwood were within 10 runs of victory, with 4 wkts in hand and 4 overs remaining. However, when Shaun was given lbw for 57, to man of the moment Greg Philpott, there was still a glimmer of hope. Chuck returned to the action, and runs were suddenly hard to come by. With Turner stranded at the other end on 45 not out, the 8th wkt fell to Chuck with Highwood still 6 runs short of victory.

But in the penultimate over, Chris Hall couldn’t save a blow that flew to the boundary.  So Chuck took the ball for the final over, a quick single from Turner brought the scores level, but exposed the Highwood tailenders. The Captain pounced on his opportunity and in dramatic fashion, took the last two wickets to tie a superb contest, and take 5 for to add to his 50 in the same game. An exceptional performance. Both sides battled really hard, right to the end, arguably one of our best contests in 12 years, definitely the closest, and a memorable one for Gorts 200th game.

Big thanks to Highwood for stepping in with the fixture, to Dai for scoring both innings, and all the spectators who came to support.  We move on to Lapworth this week, and will see Highwood Park again in August for back to back fixtures. 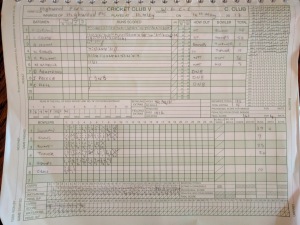