Second game and same story for the Elf this season, a loss.
On the coldest day for cricket in the history of the game the Aldridge skipper won the toss and decided to bat first. The teenage Dans opened up for the Elf and ‘Older Dan’ Armstrong struck the first blow getting Arblaster for 2. Armstrong also got Wilkinson with a catch of the season contender from Iron Man Chris Hall…think Ben Stokes off Stuart Broad in the 2015 Ashes, it was that good.

A strong partnership between Handsaker and Davies for Aldridge saw the Elf lose a bit of momentum and it wasn’t until Tom Davies got Aldridge’s Davies out for 34 (after he’d had a strop).
Chris Hall had toiled away up the ‘mini travelator’ all afternoon and was finally rewarded with a wicket in his last over when Superman Gort caught a slight nick off Chall’s bowling.
After a couple of drops and few hefty blows, Aldridge’s captain was finally out for 42 off Greg’s leg spinners.
The Elf had Aldridge 112-6 when Greg joined the circus and juggled a catch which he finally caught on the third attempt and the Elf were still in the game.
Rogers was suspiciously given not out when he was stood like a flamingo on one leg, he went on to make 36 which was probably the difference between the two sides.
Leo Chuck was fresh from his time serving Queen & Country and bowled with some needed pace picking up Milne and Arblaster in the same over to get his first wickets for the Elf.
JP was summoned and did what he does best – take wickets. JP picked up the dangerous Rogers and Ali in his third over to leave the Elf needing a tough 186 for victory.

The Elf had to bat 10 overs before tea was prepared so the game had a bit of a test match feel to it where the openers were trying to ‘survive until tea’.
Unfortunately Alex Nunns was out bowled by Rogers for one. Nunns the only man to have a lower average that Chuck this season…
In the tenth over Gort was triggered by Greg and the Elf piled in for tea at 22-2 .
Nath Reeves came in and batted well until he was bowled for 4 (still a better average than Chuck).
Dan Armstrong batted at three and did some excellent crease occupation for 15 overs but scored as quick as his over rate and only managed 5 before he was triggered.
Leo Chuck scored the first duck of the innings and the Elf were floundering at 50-5 but a good partnership between skipper Hewlitt and Elf heart throb and chief showerer Greg Phillpott put a bit of respectability on the score, when Greg departed for 16 the Elf were 101-6. Good #digin fellas.
However, as good as the 6th wicket partnership was, the next four wickets fell for seven runs and the game was over. Firstly Rob Hewlitt was triggered by Leo for an excellent 41 a real captain’s knock from Rob today to defy the opposition a massive victory.
Chris Hall was out and then Tom Davies nicked off, the ball flicked the keeper’s pad, ballooned in the air and first slip took a superb diving one handed catch.
Then team hat trick was complete when Dan Dunn chipped Yacob back to himself and the Elf slumped to a 77 run loss.

Not a great start to the season but the solidarity in the boys will see us through, let’s keep going a push for that first victory!

Resident and regular player Ian Chuck has suspiciously only played 50% of games now there is a  lady on the scene. Today he took her to mini golf instead of playing. Just let that sink in….MINI GOLF instead of playing.
When Chuck did arrive he padded Lizzie up and gave her a net which she probably didn’t ask for or want. Finally when she crashed him back over his head Chuck was heard to shout ‘no you’ve got to block it’…#village

Colder than a lot of my ex-girlfriends. In other words – practically Siberian. 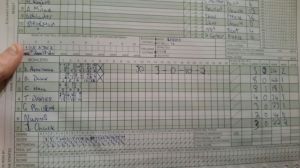