The Elf played their first away fixture of the 2019 season away at Lapworth which has become a regular springtime fixture in their calendar.
Fuhrer Gort (because he does everything, not that he has any Nazi tendancies…this isn’t the Daily Mail) won the toss and like Eoin Morgan, stuck the opposition in.

Dave Stephens and Tom Davies opened up the bowling and kept things tight early doors before Dave, who hadn’t bowled since September, got the first breakthrough. Agnew was caught behind by Gort and Davies in his next over clean bowled Buckle for his fourth scalp of the season.
Before the score had reached double figures Stephens struck again but not before Dan Dunn was on key juggling duties to snaffle the grab at the second attempt.
The top four of Lapworth were all back in the hutch before the opening bowlers had finished their spells; another fine grab off a little edge gave Davies his 97th wicket for the Elf and sent Griffin packing.
The sensationally quick over rate continued with Dan Dunn and JP taking over bowling duties with the latter coming off a fine spell of three-for last week. It was the other first change bowler who got three this week with Dan getting Smith with a swinging delivery (well, we’re in a leafy, middle class area….where else is it going to swing?) and Lons found himself very unlucky to be bowled by a ball that just didn’t bounce at all.

With 6 wickets down, Faber joined the unconventional Payne who added some quick runs between them to boost the hosts’ run rate. Faber played a couple of great shots before he was caught and bowled by Dunn.
Payne’s resistance was finally broken for a well-made 31 when Calla cleaned up his stumps and celebrated in his usual village style.
The final two wickets were taken by Chuck and Rich Fell in the 31st and 32nd overs which left Choudhry not out for a busy 17 and the hosts posted 88 for victory. 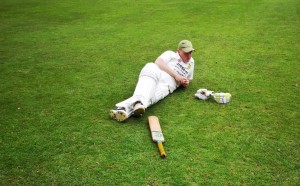 After the superb tea was scoffed down, Chuck and (tea) Demolition Dan sort to chase the modest total before the rain set in.
Chuck who was fresh from painting plates saw his stumps shatter (LOL…GET IT?!) by Fell for 4 runs.
Dan was going well at the other end, dealing in boundaries and not many 3s being ran on the big Lapworth ground.
Rich Fell provided excellent support for the revitalised batsman nudging and nurdling his way to an unbeaten 17 before Dan was caught going for the runs as the storm clouds gathered around rural Warwickshire for 41.
With the Elf seemingly only a few shots from victory the rain clouds delivered a downpour and the sides were off. Both skippers shook hands half an hour later and shower club was on.

Tea review 9 – Sensational spread as always at Lapworth, strawberries and fruit are going to make it an easy decision to make. It can’t be a 10 as there’s no olives or mustard for the pork pie but it’s up there with one of the best we’ve had in a while.

Shower Club – A bit ‘Noah’s Ark’ this week as there were only two showers so the elves had to go in two by two. Still no Dan Armstrong though…. 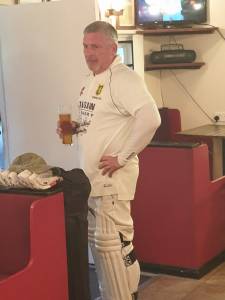 Calla with his pre-innings pint

AOB – Lots of support from the travelling wives, girlfriends, dads, sons, daughters etc….which we are very grateful of as always! Greg fell over, JP appealed for a ball that smacked the middle of the bat and Calla warmed up for his innings by having a pint. A man after my own heart!

The boys are hopeful for a fixture next week but if not we will see you on June 2nd for the annual Tim Oliver memorial game at Rushall. 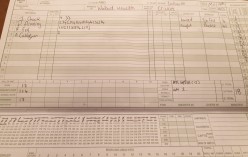