A.Gorton congratulating T.Davies on bringing up the 100.

Well. Just by looking at the result above you will be able to see that it was either some shambolic batting by both sides or some excellent bowling for both sides, however, there were some great bits of both in what turned out to be an entertaining game for all concerned.

Chuckie lost the toss and was asked to bowl by Nomads’ skipper Hutton. Dave Stephens (who didn’t concede a run until his third over) and Tom Davies took the new ball for the Elf. The latter was clearly struggling with ominously being on 99 wickets and the thought of crossing the three figure mark affected his early deliveries. Greg Phillpott dropped a chance off Dave’s bowling but clung on to a very similar catch at the other end to give Davies the prized 100th with The Elf.

Soon after Chris Hall came on and turned the screw by bowling Collins for 1 in what turned out to be one of the most economical spells over bowling ever witnessed. Dave picked up a wicket with his penultimate delivery, caught by Chuck and Nomads were on the ropes at 20odd for 3.
With scoreboard pressure applied, Chally bowled Terry who was putting up vial resistance for Nomads but middle order batsmen Moss released some pressure by hitting Greg Phillpott for two sixes and a four in one over. (Where is that pesky monkey?)

Soon after, Phillpott proved he is never out of the game by running out Dave Rolfe with a superb direct hit from about 40 yards away and half the Nomads were back in the hutch.
Dan Dunn added to the dismay when Ashton nicked off and Fitzy back behind the stumps, held on to the catch.
The seventh wicket fell with another run out but some more counter attacking batting from Moss pushed his side over the 50 run mark as the Elf’s main bowlers ran out of overs.
Captain chuck picked up Moss for 44 with a sharp caught and bowled chance, Davies then mopped up the tail by getting numbers 9 and 10 caught by Trig and bowled respectively and the Elf had the rather modest 80 runs to chase for victory.

After some wise words from Dave Stephens about being careful chasing this score down, The Elf were looking in trouble when Hutton got Dan Armstrong and Greg Phillpott plumb in front with the score just over double figures.
Chuck was out after gloving one down leg side and Nathan Reeves departed after a few flashes of the blade with the score on 24-4. This score soon became 37-6 after Fitzy was bowled and Rob Hewlitt’s brave resistance on the awkward track ended after being caught for 10. Trig was bowled without scoring and the Elf were still 43 runs from victory at this point.
Chris Hall and Dan Dunn steadied the ship somewhat with a 13 run partnership before Chally went with 30 runs still the get.
The partnership of the match then ensued between Dan Dunn and Dave Stephens who has previous chasing down totals in the lower order for the Elf.
Dan and Dave batted extremely well amassing 28 runs on a crazy day before Dan Dunn spooned a catch to the covers and the Elf needed two runs with one wicket remaining. Dunn was out for 20 but it was his excellent tenacity in the face of the defeat that really stood out today, did not shirk responsibility and kept fighting until the very end.
With all fingernails gone in the home dressing room Tom Davies scampered a single and the very next ball edged it somewhat fortuitously between the wicket keeper and 1st slip to score the run the Elf needed for victory.
What a game! Well done boys, we proved our mettle out their today and didn’t bottle it in any way!

Tea – 10. Olives provided so we’ve got to go into double figures but the pork baps had some stuffing on them so certainly may have scored highly without the greenery.

Shower club – lovely and warm showers this week as they always are in Rushall, albeit a bit of a squeeze to get in!

AOB – five catches dropped this week but we battled through. Excellent fielding from Nathan Reeves and some personal milestones reached along the way. Well done boys we are 3-2 on the season and hoping to get the 4th win next week again Beaumont. 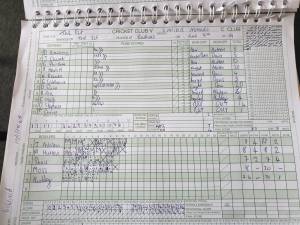