The first time in what seemed an age the Elf boys were finally back together to play out their decider against the Asian contingent of Bharat Parivar. The series stood at 1-1 before the game began today.

Well, for 28 overs the Elf couldn’t buy a wicket. The skipper Chuck tried everything, even bowling Tom

Stevie Wonder kindly agreed to complete the markings this week.

Davies up the travelator for the first time in ages but it wasn’t to be. So at the end of the 28th over the score stood at 160-0. Stephens, Davies and Dan Dunn had all toiled away to no avail (with a few monkeys thrown in by visiting batsman ‘Satesh’ who whacked his way to a century) before Chris Hall bowled him in the 29th over and the carnage commenced.
Nathan Martin on season debut got a wicket in what was going to be his last over (imagine if Chuck had taken him off at this point?!) and then one again in his sixth over when Greg Phillpott got a steepler of a catch but made no mistakes.

In the 36th over of the innings a moment that would go down in Elf folklore happened. With the runs on the board the away batsmen had freedom to play shots but the Friar Parker Martin was having none of it. Two Parviar batsmen swung and missed and saw their stumps demolished. THEN IT HAPPENED….The Elf fielders crowded the new batsman and Martin ran in….the ball cannoned into the new batsman’s front pad and the noise from the lads was deafening. If you were in Pelsall/Aldridge area you may want to check your windows for cracks because I’ve never heard a louder LBW appeal in all my given days. Martin didn’t seem to want to appeal but turned around just in time to see the umpire nod his head, then raise his finger and let me tell you, the next thirty seconds were sheer euphoria. There was a massive pile-on on the square, celebrations galore! A HAT TRICK for an Elf player and it was the first one since club LEGEND Jonty Nicholls got one in 2008. What a moment! Serious pandemonium for the boys. If I could bottle up the emotion of that half a minute and sell it, it would out sell all illegal drugs on the ‘market’ and I’d be writing these reports from Bora Bora because it’s something you can’t describe, rather like the Thai Sweet Chilli Sensations when they touch your taste buds ay Nicka/Gail?

The Elf wrapped up the innings with some excellent fielding from brothers Chuck. Leo off his own bowling for a scooping run out and Ian from mid on with a great direct hit. Tom Davies toiled up the hill in the final over and got two wickets, a catch from Chuck and another LBW for the tally. The visitors were all out for 215.

After the teas were smashed (big hand to Nicka for going and getting some Olives and cakes) the Elf began the tall order of chasing.
Brothers Chuck were in and out for a combined score of 6 before Dan Armstrong scored 37 which included a big six and Rob Hewlitt who was out for 19 put on a good partnership. Armstrong finally run out after Rob made him do a metaphorical bleep test in the middle.
Dan Dunn and Rich Fell went for a boundary a piece but Greg Phillpott came in and played an excellent innings to take the Elf towards a competitive score. Nath Martin got a quack (BUT HE GOT A HAT TRICK) and Chris Hall got 2 but Dave Stephens hit 24 valuable runs in a good partnership with Phillpott before he was bowled. With one wicket to get Phillpott hit the joint highest score of the season with 43 and Tom Davies got another red inker for three. 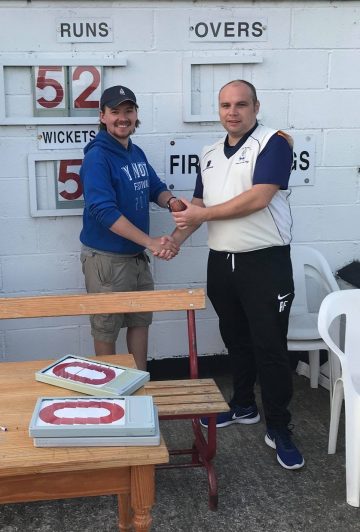 What a day boys, glad to have been there to have seen a moment of Elf history. Only the third hat trick in 32 years. THAT IS WHY WE PLAY CRICKET.

Great sandwiches today but Nicka saved the day going to get mini rolls and OLIVES. Superb.

Forgot my towel but we know what the showers are like in Rushall, rather like a retirement home in London, warm and cosy. 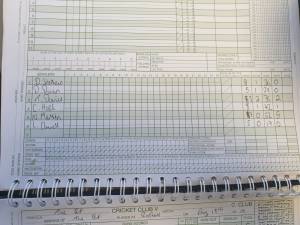 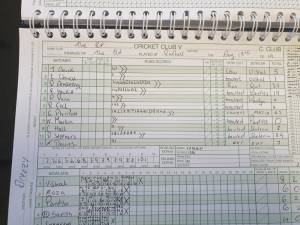 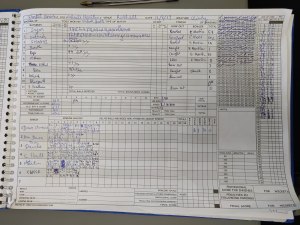