We had all been praying for good weather to grace this special fixture against Alrewas, so when we all arrived to clear blue skies, the omens felt in place for a fantastic day of Sunday friendly cricket. With over 20 years of Elf experience in the bank, Richard Fell was nominated to skipper a side blessed with a mixture of legends, youth, and a few players somewhere in between the two….I’ll leave it to all you players to figure out which category you fit into.

The Alrewas skipper offered us the option of bat or bowl first. Fell had no hesitation in going down the “Classic” WHCC route…”We will have a bowl, and throw the ball around” was the response to a really sporting gesture from the opposition. The 2 D’s, opened proceedings. Dave Stephens and Dan Dunn. But in a 35 over contest, the Alrewas openers, Burns and Scott got off to a flier on a quick outfield. With the first 50 runs coming quite quickly, it was time for the Captain to unleash the brains trust of our slip cordon on the game.

Gary Reeves (Legendary wicket keeper) Rick Jarrams (Specialist 1st slip) and Dai Preece (Expert 2nd slip)…. So I was reliably informed by the Doc, that a combined age of 200 years were present in the “Nick off” area. Their reactions might not be quite what they were, but what a job they all did. Just to add to all this nostalgia, it was John Nicholls who got us our first breakthrough. In his own words….a perfectly executed slower ball, which he was really really pleased with. And guess who bowled the only maiden of the entire innings? Jonty. Taking him to within four of that magic 400 total….78-1

With Jonty on fire at the pavillion end, Captain Fell nominated this moment to bring on an old bowling partner of our Maiden Machine…..Frank Jacob. We all watched in awe, as Sonic the Hedgehog (an old Franky nickname) casually strolled onto the pitch after an 8 year sabbatical from all forms of cricket, to land his first ball on the spot. Standing at mid on, all I could hear as Franky ran in (Well, ambled in) were screams of “I haven’t bowled for 8 years you know” Frank completed his first over, and did what Frank always did….went off to field wherever he liked.

After a quick drinks break, a few wickets started to tumble. Chris Hall removing Burns for 48, then Lingwood for 4. Courtesy of catches from Chucky and Nathan Martin. But then a howler of a dropped catch off his own bowling, prompted Frank Jacob to dish out a bit of the Hairdryer treatment to his old team mate…..”Get angry! And steam in!” were Frank’s exact words. A chastised Chally took the bait, clean bowling Williams for 13. Cheers Frank…..160-4 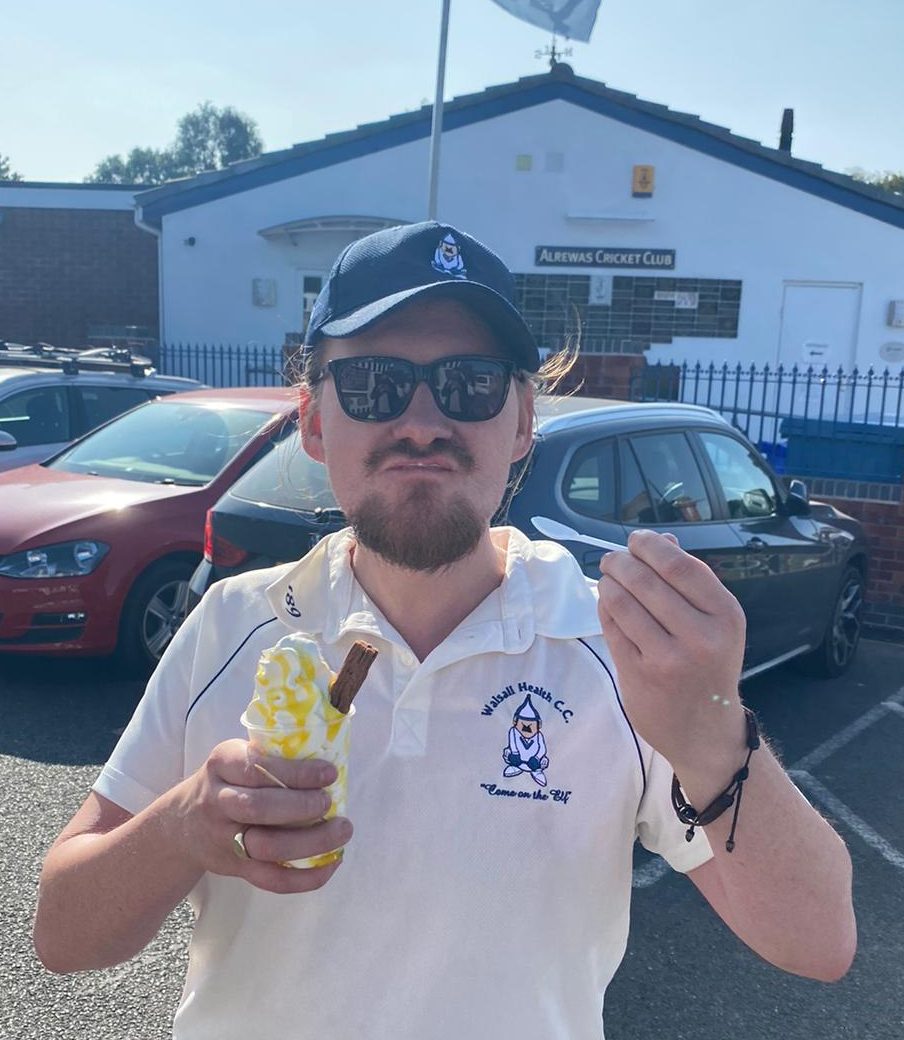 Nath, better than a five-for.

Nathan Martin came into the attack, to join in the fun. The Friar Park Express started really well, until his 3rd over. The classy Tringham, reverse swept Nath for a couple of boundaries. There were rumours of a back injury, and the lad suddenly seemed a bit distracted. There was concern all round, was Nath ok? We need not have worried. That momentary lapse in concentration was down to the Mr Whippy Van arriving on the club car park. You know that feeling when one pitches on leg, then hits off stump? I think it was that level of euphoria. That elusive 99 would be waiting for the elated N.Martin at tea.

The final 5 overs were shared between the two J’S….Josh and JP. With Josh completely baffling Rowland in the flight, stumped by the quick hands of the Doc for 34. The G.Reeves had really warmed to the task, moving your back foot out of the crease at this stage, not really a wise move. JP twirled away at the other end, but was out of luck on this occasion, bowling most of his spell against the very good Alrewas 1st teamer, Cole. Who will get another mention later on in the report. The Alrewas innings closed on 234-6.

After the tea break we began our chase. But shortly after the resumption, the game was paused for a very special moment. Alrewas gathered both teams together, for a presentation. The speech was a thankyou to all the people who put in the hard yards to help make Alrewas CC run smoothly, and a celebration that through such a tough year, cricket was played with great success at a club who were fantastic hosts yesterday. I think the WHCC guys would agree with what was said in the speech….”He would hate the attention, and wouldn’t agree with the decision”……. 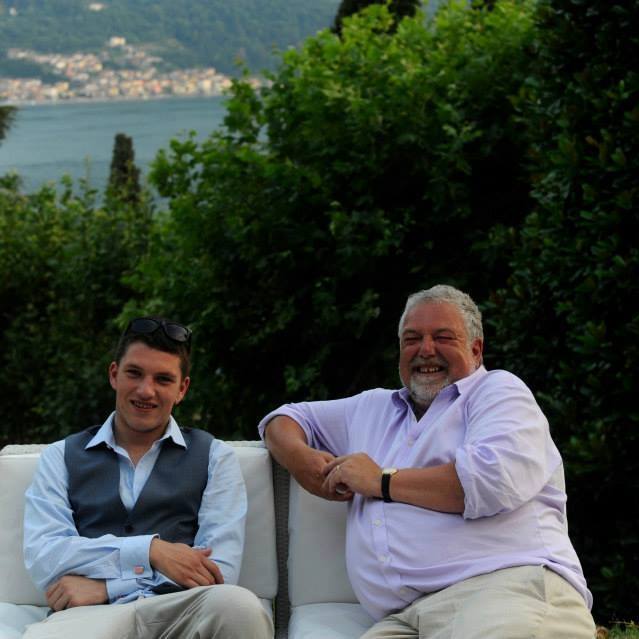 In typical Andie O fashion, we were told to get back out there and play some cricket. Ian Chuck had certainly listened to the instructions, looking in great touch before being caught for an aggressive 39. Dan Armstrong was unlucky to pick out one of their strongest fielders, caught on the long off boundary for 4. Maybe Dan was a bit unsettled after taking one in the rib cage off one of the Alrewas female players? The Bodyline type hostility worked because she got him out, much to the amusement of Greg Philpott and the Club Pro, Dan Dunn…..62-2

Armstong had been peppered up before being snaffled in the deep.

At this point, Dan Dunn was joined by the in form Nathan Reeves. This week, Nath had selected 5:23pm for his tee off time, and once again, we were entertained by some brilliant maverick ball striking. 19 off 16 balls, including 3 fours, well batted Nath. At the other end, the Club Pro, who was looking well set on 13, got one of the balls of the day. Full, straight, right in the blockhole, a tough one to keep out.

With the score at 96-4, we really had waited long enough. Gary Reeves and Rick Jarrams were both padded up and ready for action. Sadly, neither of these club legends managed to get off the mark. Doc got a good ball and was caught at slip, followed by Rick who was bowled by Williams. Now there was some light hearted chat about duck trophies after the game. Would we really be that harsh?

While all the carnage was happening, Dave Preece was calmly going about his business. Dave Stephens proved to be a very able partner, blasting a quick 21, taking us to 159-7. Captain, Rich Fell was unlucky to be run out for 3 trying to keep us up with the scoring rate. Then Jonty departed for a French cricket style 6…….173-9

They sometimes say you save the best until last. So as Frank Jacob (who had borrowed Docs gloves and pads) strode out to bat, hopes were high of a resurrection. It wasn’t long before Dave Preece became engaged in a few…Yes, No, Wait Frank calling. I reckon it took 3 balls for the….”Remember the game Frank ran out 4 players in a Cup semi final” story to be told. Blissfully unaware of the hysterics on the boundary, Frank and Dave Preece edged us ever closer to the Alrewas target of 234. The brave effort finally ended after Frank was bowled for 5. A 10th wkt partnership of 40, with Dave ending the game unbeaten on a superb 60. WHCC 213 all out to conclude a memorable days cricket.

This has to go to Josh Butler.…..as mentioned earlier, near the end of the Alrewas innings, Josh picked up the wicket of Rowland. Realising his supreme effort meant that the rather decent Alrewas 1st team batsman, Cole was now walking out to bat. He just looked like one of those batsmen you just know is going to smack you everywhere if he wants too. With 5 balls remaining in the Butler over, Josh made the shrewd observation….”Well at least he can only hit me for 30″……Brilliant

The game was once again really well supported. Nicka was one of the first men on the scene, armed with a King Size bag of Wotsits. The Preece family, Bob Plant, Greg, Sam and Jade with young son Sebastian, who was noted taking a walk around the boundary, already planning to take his Dad’s coveted Number 3 position in the batting order in a few years time. I think its safe to say that the generous offer on at the bar of £1 for a beer was really appreciated by all the players and spectators who came to Alrewas.

It has to be mentioned that this game saw an extremely unique achievement for 5 of our longest serving players. (Left to right) John Nicolls, Rick Jarrams, Gary Reeves, Frank Jacob and Andy Gorton . Maybe Enid Blyton should write a book about our very own “Famous Five” becoming the only WHCC players to have played in all 5 decades since the reformation in 1987. Well done lads

Now I asked the Captain Richard Fell to say a few words about yesterday, so here he is with his own take on the day…..

“It was an absolute honour and pleasure to Captain the team packed with people I’ve grown up with, people who I admire, and people who I look up to. The Health has been a huge part of my life, and will be, as long as it continues. The values the club were founded on were on full display at Alrewas, smiles on faces, everyone taking part. A lot of people who were there yesterday, not only taught me how to play cricket, but how to be a man. Long Live the Elf”

There was quite a lot to write about today, but what a game to finish our 2020 season. Great venue. Great hosts. I had a good chat with Andie, we spoke about a few things, but I’d like to close the season and the final report with something I mentioned to him, that he wasn’t aware of. A photo…..The very first game since the reformation in May 1987. Chasing just 50 runs to win…..look who faced the first ball, then steered us home.