A hot day saw everyone arrive on time. Although the game promised 11 ‘fit men’ only 8 turned up. We are only usually missing one fit man and the Elfs Casanova jet setting in Panama & New York was on an international break. Stuart Slater will return but who knows in what time zone!

With many of our own squad unavailable Danny Conway stepped into the fray. And he was involved for almost the whole game. Fielding for us. Opening the batting. Umpiring and fielding for the opposition. It really was a committed return to the team!

Andy Ince was amazing in the field and also with some consistent and fiery bowling he deserved his wicket.

6 Time fielder of the year Rich Fell was instrumental in the Elf Getting a run own. Sharp Fielding and an accurate long throw gave Gort the opportunity to whip off the bails. Less impressive was later catching out The Elf Legend. Just Booooooooooo!

Re-focussing after a dropped catch Nathan Reeves was as always energetic in the field and the pocket rocket turned pocket battle ship after some sledging turned nasty. Beep beep beep beep beep your beeping beep beep face beep. Or something like that. Great effort with bat best this season. Although I hear helmets were broke in the post walk off flounce!

Gort moved up the order today and after smashing a few quick ones decided to give Rich ‘The Traitor’ Fell some dolly land practice. The Gort wore a few behind the stumps today, excellent glove work. Just the best there is.

If your talking about the best there is then surely the Premium strike Bowler, The Excellence of Execution, Ice Man Chris Hall has to be mentioned. Coolness personified even after Wright dropped a chance running backwards over his shoulder. (Clearly missing last weeks batting hero Lyndon Billingham to talk him through it!) Chally shrugged it off to get his wicket and great figures.

Chuck did however take a catch running backward over his shoulder that was a superb take. Maybe up there for the best catch so far this season. Sledging our own batsman was an interesting move later in the game. Almost as interesting as advising the skipper on tactical matters!
The reigning player of the season also getting us over the winning line with the bat.
And also deserved a wicket with the ball. Some top bowling too. 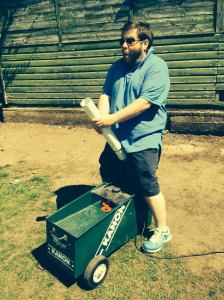 Matt Wright firing on all cylinders after this pre match warm up.

Tom Davies, was polarised in his happy place and his efforts in his bowling were monumental. Great wicket and deserved more with yet another 100% plumb LBW. Dynamic in the field and generally just great cricket on the day. Stay in that Happy Place Tom!

Wright picked up two wickets in his second spell after being worked over in his first. One of which was an amazing bottom edge catch from Super Andy Gorton.

Rob Hewlett set the standard with the bat today like so many times this season. Loving the charge down the wicket to smash some fours. And also got a wicket with his bowling.

So the mighty Elf march on. A weakened opposition but we can only play what is In Front of us at the time. And we chased the 121 total down in 26 overs. Great effort from
The whole team again!

He might lose the toss but he wins us games. Let’s salute our Captain Dave Preece as he leads us to another Victory!!

TOP BOWLER
& MAN OF THE MATCH
Everyone’s favourite Ginger. The flaming locked super stropper, Tom Davies.
Superb bowling display, great in the field, umpired and Fielded for the opposition!
All round ‪#‎winner‬. No radiohead this week!

TOP FIELDER
Got to be Andy Ince aka The Ball Magnet.
Like a wall out there stopping everything that came within his proximity! Superb effort!

AOB
The day started and ended with The Kannon.
The automated ball flinger gave muchos merriment until we broke it at the end of the day by putting an apple in it!

Lovely to have Grace and George at the game today! Another family feel. Angharad, JP and Rachel the big kids had fun too.

JP’s favourite Mike Sayers was also there enjoying the sunshine and almost taking his daughter out with a Chris Waddle like 1990 World Cup semi final wild swing of the foot. I’m sure Katie would not be impressed if her daughter went home with lump on the brow.

Random bloke sticking his head in the changing room to hear us belting out White Snakes, Here I go again, was comedy gold!

Wonderful to Mrs Skipper on the verge of providing more Elf members at the game too. And Mommy G attending fines was a rare and welcome treat! (‪#‎favourite‬)

Unhappy with the current state of jugs and cups it’s could be that a new high tech portable drink distribution system could be on the cards.

Slightly disappointed that there was no hang over rating after the previous nights wine intake while watching a weepy!

DAI WATCH
Not the finest hour from the scoring maestro this week who frankly got the score book in a little bit of a mess.

Good job Mrs P was there to keep him in check. As an ex teacher his own book report might be… Can do better!

The fines explanation of what went wrong was like a Welsh Ronnie Corbett telling one of his rambling yarns.