The Elf suffered an agonising defeat in the British Summertime this week, losing on the final ball of the match to usual July opponents the Fitmen from Moseley.

In scorching conditions, skipper Hewlitt lost the toss and was asked to bat first by his opposite number. This looked a strange decision when on a baking hot day and a decent surface the skipper would choose to bowl but once both of the Fitmen’s openers had bowled a few deliveries it was evident as to why.

The Elf were in a terrible shape when Ralph and Healy dismissed Chuck and Gort respectively for 2 (Gort getting triggered by ‘Trig’ in amongst the chaos).
Dave Stephens up the order to 4 saw off a lot of the deliveries from the pacey Ralph to no avail, eventually getting caught for the longest Duck in Elf history.

Rob Hewlitt came to the crease to join Alex Nunns who finally made his Elf debut after months of helping Rach with the drinks and what a fantastic debut it was. The Skipper and Nunns piled on the runs in the baking heat once the openers had finished their spells.
Nunns played some quality shots on his way to a classy 72 until he was trapped in front off the bowling of Shereef (who did like it).
Like a bus, when you get one, you usually get another and today was no different with this partnership. Hewlitt was out next over for 44.
Having looked good on 131-3 the Elf were in the middle of a mini collapse when after the strong partnership both Greg Philpott for 10 (another LBW) and Nath Martin or ‘Larkin’ was out for 4. Larkin was bowled by the excellent Ralph who also picked up JP in his next over for a quack.

With the score on 147-8 Tom Davies and Chris Hall came together for an excellent lower order partnership of  32 before Hall was bowled in the last over for 22. Not before he had hit a few meaty blows to the boundary to set a target for the visitors to chase.

The Elf set about their bowling display in typical fashion with Larkin and Stephens but opening bat just down as ‘Mo’ certainly wasn’t larking about when he played some fine shots straight into the gaps to get his team into the 40s for no loss.

Usual first change bowlers Hall & Davies came on and grabbed a wicker a piece. First Hall picked up his opposing number ‘Hall’ for 13 when Dave Stephens took a ‘no look catch’ in the low summer sun at square leg.

Tom Davies was extremely unlucky to not pick up ‘Mo’ in his third over when he spilled a hard and low caught & bowled chance.
The next over though was not too dissimilar to the Flintoff vs Ponting over of the 2005 Ashes between Davies and Tahir.
With the first bowl of his over Davies bowled a delivery which cannoned into Tahir’s front pad in front of all three wickets, no edge to be seen but also no raised finger to a shell shocked Davies who once again was on the receiving end of a bad decision.
Davies then ran in with steam coming out of his ears and bowled 5 wides trying to bowl to fast but then came back with the right answer. Two balls later Tahir played on to his stumps to send the fiery Elf bowler into raptures, quite village really but great to see.

Into the attack came Ian Chuck and Elf Legend Jonty Nicholls who managed to get 3 wickets between them, two for Chuck and one for Jonty. Chuck getting an LBW and the other two wickets were bowled.

With the score on 94-5 the Elf looked odds on favourites but batsman Mo really was producing for his team. He reached his century when the score had barely hit 130, it was without a doubt the best knock of the season so far with some superb shots into gaps.

With ten overs to the Elf seemed dead and buried but bowling from Chuck & Hall managed to peg the visitors back when it all came down to Dave Stephens; last over with 5 required for victory.
The first ball was a dot ball to the Elf players’ delight but the second went for two, unfortunately for the Fitmen Mo was not on strike. DS then produced another dot ball before Green spooned the fourth ball of the over to Nunns at Gully and the Elf sniffed a victory.
In came ‘Raj’ who somehow managed to get bat on ball and scramble one leaving ‘Mo’ the hero of the hour for his team needing two for victory.

Hewlitt set the field but Mo managed to run home for the second to give his team a victory that without him would not have been possible.

The changing room after the game was a sorry sight for the Elf lads who fought valiantly against a side who had one very good bowler and a class batsmen to get them over the line.

Next week the Elf face Lichfield Nomads for their fourth home game in a row.

Dai Watch – The Welshmen this week was not on usual scoring duty but was on sleeping duty when Fitzy caught him catching some Zs in the summer heat.

Rach’s pop scene – This week Rach was in fine form with the jugs when she decided to disobey all orders from the clubhouse and washed out the dirty jugs and cups despite being told otherwise.

AOB – Matt Wright was on full 12th man duties this week after he stopped/started a potential scuffle when defending Davies after his mini meltdown. 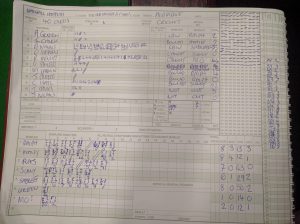