The Elf defeated Lichfield Nomads this week in tense encounter that lifted them to four wins for the season.

On an overcast day, captain Hewlitt won the toss and decided to bat first. In went usual opener Ian Chuck but he was partnered for the first time by Alex Nunns for his second game of the season.

Nunns & Chuck put on a steady opening stand to put the Elf in a good position before Nunns was bowled by the pacey Hopton for 27 hard fought runs.

In at number three was Elf veteran Dave Stephens who after the longest duck in Elf history last week, didn’t hang around trying to get off the mark, spooning a catch to mid off who dropped a dolly and DS had a reprieve. The first of many.

DS then managed to give catching practice another two times before he was bowled by Fearon for the second 27 of the innings.
Back from AWOL duties, Nathan Reeves was in at four and he got fourteen important runs, including one of the biggest sixes in Elf history before he was bowled by Hoddy.
Captain Hewlitt suffered the same fate a few overs later when the same bowler dismissed him for eleven.

As usual, in amongst the scattered batting card Ian Chuck made his way to another half century and left himself 21 agonising runs short of Gort’s highest runs in a season total before he was triggered plumb in front for a well made 56.

Down the order to 6, Gort arrived for some ‘tick tick boom’ and he duly delivered in an excellent partnership with JP Jonathan Priest who also made 7 before he was triggered.
Gort eventually walked off 27 not out which included 5 boundaries with Dan Dunn who upped the village stakes this week by raising his bat to the gallery after he finally got off the mark for the season.
The Elf managed to set Nomads 184 for victory.

Messieurs Stephens and Dunn opened the bowling for The Elf and by the time their spells had finished they had put the home side in a strong position. Younger partner Dunn got a perplexed Fearon bowled around his legs for 1. Stephens then chipped in for a couple of wickets, firstly getting Westwood caught by Davies for 8 and trapping Hutton in front of all three for 1. At this stage the Elf had Nomads on the ropes at 28-3 but carnage was soon to ensue.

Davies and Hall came on at first change but were unable to get a breakthrough with several catches either dropping short or being dropped the partnership of Stanley and Taylor made its way past 100 before the Elf got the wicket of Stanley for 30 when Nunns took a catch in the covers off the bowling of Chuck in the 31st over.

By this time the hashtag #hewlittout was trending on Twitter and home skipper was not helped by Taylor had made his way into the seventies at this point and looked to guide his team home. However, with the visitors only needing 24 off four overs Davies in for his seventh over turned the tide.
The first ball was a little off cutter which deceived Taylor and sent his off stump back for an excellent 75.
Davies then managed to dislodge the dangerous Vale for 13 when Chris Hall took a superb diving catch at fly slip to turn the game on its head for The Elf.

From 160-4, the Elf had got Nomads 163-8 by the end of Chuck’s next over. He picked up Ralph lbw for 1 and also bowled Forster for his 50th wicket for The Elf.
Davies managed to see off proceedings when he bowled Pickering for 1 and duly gave his opposing number a send off of village proportions to see the Elf snatch victory from the jaws of defeat.

It was a good performance from the home side this week who stuck at the cause and never gave up. A lot of good performances to boot which should not go unnoticed well done all concerned.
Thanks to JP, Dan Dunn and Nathan Reeves who all fielded for the opposition after Brannigan went down in his third over and could not continue.

The Elf travel to Coventry next week to face Willow in their usual start of the summer holiday opponents. 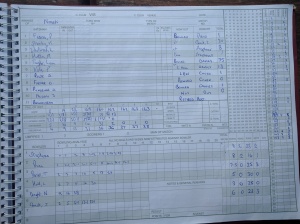