On a sunny August bank holiday weekend, the two clubs who Tim Oliver played for met for a match in his honour at Rushall cricket club.

The Elf fielding first and got off to a good start when Sam Stephens steamed in and picked up two wickets for 5 runs.
Elf Legend Jonty Nicholls chipped in with his obligatory wicket when the home side found themselves on 27-3.

A big partnership between Rushall batsmen Plant & Everall then ensued. Elf bowlers Chris Hall and Neil Slym were dispatched to the boundary on a few occasions.

Tom Davies watching his bowling being dispatched over the fence.

Late to the game Tom Davies who turned up at 1.30 thinking it was a 2pm start (one

word….VILLAGE) was on the field and got batsmanEverall bowled for 68 after the Rushall opener lost his ninth life.

With the score on 121 in the 30th over The Elf were looking at defending a total lower than 180 but Rushall batsman Wall came in and bludgeoned his way to a 50 in 9 overs including dispatching usually economical Davies over the boundary on three occasions.

Chris Hall came back into the attack and picked up two wickets, first the wicket of Plant who was caught well in the deep by Chuck and lastly of Elf and Rushall legend and father to Nathan, Gary Reeves.

Sam Stephens changed ends and came up the hill for another over and managed to get Dunn and Edwards out in consecutive deliveries. Dan Dunn picking up ANOTHER duck. *sharpens scriber for the Duck award trophy*.

All in all Rushall posted a very defendable total of 212 for victory off 40 overs.

After the lads had demolished Nicka’s scrumptious tea. Chuck and Elf legend Aftab Nawaz entered the fray to begin the chase.

Aftab was caught behind for a solitary run and he was soon caught up in the changing rooms by Chuck who spooned a catch to midwicket off the bowling of teenager Dunn.

Nathan Reeves managed to get as many runs as his dad on this occasion putting ‘the shot’ to good use in slapping two boundaries before he became younger Dunn’s second victim.

A good partnership of 44 then settled the dressing room between Andy Gorton and Sam Stephens before Stephens was brilliantly caught behind by Peach off the bowling of chef Dunn for32.

Andy Gorton then became the victim of an identical dismissal to another superb catch by the Rushall keeper.

Two former skippers of the Elf, Dave Preece and Rich Fell came together at the crease but it didn’t last long until Preece was bowled by Portsmouth.

JP strode out the middle and hit some good shots on his way to another sterling red inker. Rich Fell was bowled by Dan Dunn for 19 and Dave Stephens rounded off the wicket column when Dunn the younger got his fourth scalp of the day.

It truly was a fantastic day’s cricket and all the boys raised a glass in honour of a club legend after the game. They even dived in to the a la carte menu on offer on the grill post game with Rich Fell doing his best burger flipping impression in keeping the lads’ stomachs topped up as they drink into the night in memory of the great man.

The Elf between their autumn fixtures next week at home to Sportsman who defeated them in the season opener back in April. 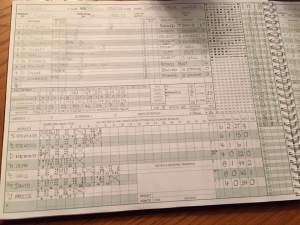