On a damp on dreary afternoon in Aldridge, The Elf took on Wall in one of their final games of the summer.

Stepping in to skipper the side in absence of Captain Hewlitt was Dave Stephens whose opposite number won the toss, looked up at the sky and said “you can have a bat” to DS and to the disappointment of the home dressing room.

Ian Chuck and Alex Nunns opened up proceedings for the hosts and Chuck got well into his stride crashing the ball to the boundary on four occasions in the early stages of the game. In doing so the Elf’s Kolpak player nudged his way past Gort’s record of most runs in a season with still four games to go. What an achievement by a talented young batsman. I think we can all agree this deserves a BIG HAND.

Chuck was first to depart when he played on for 16 off the tiresome bowling of Johnston. Nunns was next to depart for his first single figure score for The Elf to an outstanding catch by Wall player Caddick.
At short cover Caddick lept to his right and plucked the ball out the air with one hand, it was a special catch as it was going to take something special to remove The Elf’s in form batsman.

Andy Gorton was in at his unusual spot at number three but Nathan Reeves was in and out for two.
Gort was looking like he was going to give his best impression of Tom Hanks in Castaway when all his new partners kept giving their wickets away.
Younger brother Leo Chuck fresh from being ‘In The Navy’ did his best to get the ball off the square but middled all his shots to a fielder until on about the fifth occasion he holed out to mid on. He certain wasn’t the only ‘village’ person on the home side’s batting line up this week.

Greg Philpott managed to avoid another duck with a nice shot into cow corner for  a boundary to the ultimate disappointment of Dan Dunn watching from the side.
Skipper for the day Stephens was in and out to the excellent bowling of left armer ‘Bull’ who managed to get Philpott but also N.Larkin in at 8 for two and a quack respectively.

Matt Wright wasn’t in for long either when Phelps created a splash and bowled him for a duck.
On loan from Rushall for the day, youngster Dan Armstrong managed to get a single before he was caught off the bowling of Thomas.

At 61-9 the Elf were wondering what had gone wrong out there until Tom Davies in at 11 gave his best ‘Wilson’ impression to Gort’s Tom Hanks and the last wicket pair put on 31 to move the Elf towards 100 before Davies was bowled for 13 off the bowling of Rahman leaving the excellent Gort stranded on 26 not out.

The Elf started their defence of the low total in good fashion. Nathan Larkin bowled Rahman round his legs for 2 and Dan Armstrong put in an excellent show at the other end getting the scalps of Buxton and Edwards for 13 & 9. At this point The Elf were sniffing at victory on Duckworth Lewis with the rain starting and the visitors on 29-3.

Davies and Stephens replaced the opening pair but a few good strokes from Phelps pushed the side from Staffordshire over the 50 barrier.
Davies managed to clean up Phelps for 11 with a nose dive of a yorker. Stephens then picked up Johnston LBW with the score barely over 60 and the Elf again though they could snatch victory from the jaws of defeat.
Davies got his second of the day and 20th of the season when he bowled Hatton with the score on 68.

Unfortunately Caddick who took the belting catch earlier managed to steer his side home with a good knock of 21 not out and the away side reached their low total in the 33rd over.

It was a good display in the field from the boys who showed great character and the spirit of The Elf by pushing a strong side all the way.

Next week they travel to Rushall to play for the Tim Oliver memorial trophy. 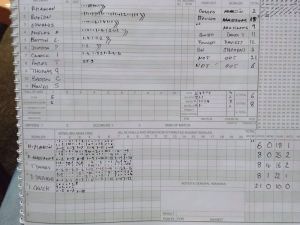