The report should really just say this:

On a day where one team turned up with a batsman who is far superior for this level and biffed bowlers who will never be good enough to get him out all around Aldridge, there was only going to be one winner. Fair play to K Ali from Sportsman for scoring the runs, however he really should be trying his hand against much better bowlers and winning games singlehandedly.

Anyway, moan out the way. The Elf succumbed to their heaviest ever defeat this week at the hands of Sportsman who the Elf have beat on the two other occasions the sides have met this campaign.

On a dreary autumn afternoon the opposition won the toss and elected to bat first, the Elf down to ten men after a seriously late drop out took the field with a depleted side and with only ten fielders.
Nathan Martin and Dave Stephens opened up for the Elf but batsmen Jawakoski and Williams put the openers to the sword and Sportsman were 56-0 after 10 overs by the time Elf made a bowling change. Tom Davies came on and got a wicket in his second over, getting Williams caught at mid off by Chris Hall for 32.
Unfortunately, enter Ali. Ali scored a fast 80 against the Elf last year and looked in good nick, hitting his second ball to the boundary but it was his third ball where the game changed. Davies got a genuine edge but part time keeper Ian Chuck couldn’t gather the catch, only agonisingly chipping the ball over Jonty’s head at first slip and the game was over.

Ali went into Ali mode and smashed the Elf lads all over Aldridge. Davies, Hall & Armstrong all had a go but to no avail.
Sportsman were well over 200 when JP came on and got Jawakoski to nick off to Chuck in the 27th over but by this time the game was surely over.
One bright note was the introduction of the ICON that is Jonty Nicholls. Still bowling that incredible line and length at 63 years of age is a joy to behold. Jonty managed to dislodge Ali when he hit a ball to Hall and long off and was out for 153 in a Sunday game. Well played.

Jonty managed to get another wicket, a sharp caught and bowled to get rid of Hussain and in the final over Chris Hall got Khan for 11 but the damage was almost done with Sportsman scoring at nearly nine an over and setting a whopping 351 for victory.

The Elf started their innings knowing they did not have anywhere near the firepower to chase down such a huge total and were banking on Ian Chuck to get the 75 he needs to get past 1,000 runs for the season.
Dan Armstrong his opening partner was out first for 4 and then it was all over for the Elf lads, Chuck was bowled after a contentious LBW shout the ball before to ‘Nasser’ for 28 runs. Looks like the Elf lads have got to pray for decent weather against Lapworth next week and hope Chuck makes a half century to go where no man has ever gone before. (Not Star Trek)

Hopley and Hewlitt made fifteen between them but Tom Davies triggered the skipper on nine and Hopley walked after nicking behind and the already short Elf batting line up was terribly exposed.
The one bright spot was Nathan Martin batting well and hitting some good shots to top score his way to 29 well made runs on a day of cold and wind, it was looking hot off Martin’s bat.

Hall, Davies and Preece were all out for single figure scores and Jonty added his name to the duck trophy list when it was ‘all over red Rover’ in the 33rd over.

The Elf have their last fixture next week against Lapworth, get your prayer mats out and pray for sun and pray for Chuck to cash in for a big score.

The Victoria sponge always the highlight at Aldridge, real top cake. Chocolate fingers and Galaxy Cake Bars made a welcoming first appearance of the season. 6/10

Aldridge showers have gone downhill since the new mood lighting. Flow is low and spray is also a bit erratic, always warm though which was much needed after the chilliness of the September cloud and wind had pinned the Elf lads back all afternoon. 6/10

No travelator at Aldridge but I reckon some of the lads would rather have taken on the ‘Gladiators’ course rather than bowl at a batsman who is far too good for Sunday friendly cricket. Where is John Anderson when you need him? 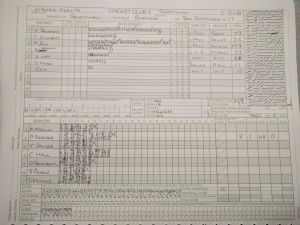