The Elf played their second consecutive game at Rushall this week in a game where an icon was born. Andy Gorton, one of the very few original 1987 Elves left today surpassed Tim Oliver’s all time run record on a glorious day in the English summer sun.

Skipper Hewlitt won the toss and elected to bat on what looked like a road and Hewlitt was not disappointed. Andy Gorton and Ian Chuck absolutely piled on the runs and made the Nomads’ bowlers really work for their wickets. Some revenge for the Elf as they were drubbed by Nomads last June was revenge was certainly a dish better served cold today.

Gort only needed 55 to break the record and there was some muted celebrations when he reached his 50 as the spectators knew the icon was only five away from greatness. Gort did so with a rare two on Rushall’s pitch to a rapturous applause from all watching. Thoroughly deserved to a legend of The Elf who now has his name etched in glory.

Slightly village circumstances before and Ian Chuck who looked about as likely to get out as I am to marry Kelly Brook, retired once he reached his superb sixth ton for the Elf leaving Rich Fell to leave in disgust.
On loan from Rushall Andy Callaghan came in and scored with good time to get some more runs for his second club. Just after Chuck retired he went to umpire and obviously triggered Gort on 64 but who cares?
Calla was shortly out with the score on 222 after Nath Martin refused to put one leg in the air and obviously there was a wicket on Nelson. Dave Preece nudged his way to 16 not out and Rob Hewlitt got a single as the Elf finished on 235-2.

After tea was devoured the Elf began their defence of the score with Dan Armstrong who couldn’t quite get the line right and Nath Martin who both bowled well in the opening stages but it wasn’t until the Iceman Chris Hall entered the fray in the 10th over got a wicket with his first ball and the Elf were on their way.
It wasn’t until the part timers Andy Callaghan and Greg Phillpott came on to bowl did the Elf start to turn the screw. Phillpott picked up Stanley and Calla ran out Westwood after some superb fielding from Dan Armstrong.
Spin King Jonathan Preece came on after drinks and bowled Turnbull and the Elf knew they were almost home and dry with the overs rapidly decreasing.
Nomad Paul Fearon who bowled well earlier came in and gave the ball a bit of a whack to finish on 46 not out with Tom Davies getting the last wicket for the Elf when he got Hutton caught and bowled with a great reactionary catch.

As the sun began the set the Elf were led off the pitch by now iconic Andy Gorton and they have now got their 4th win of the season going into next week against usual opponents Beaumont at Aldridge.

Strong tea as usual at Rushall. Sandwiches, pizzas, chicken legs, an array of crisps.  No olives, strawberries or mustard so a standard 7/10.

Still no Dan Armstrong in the showers despite turning 18 in May but always a good shower at Rushall and definitely better than Aldridge. 8/10.

Chally and Nath Martin trudged up the travelator for 16 overs and only one wicket between them this week. Chall also been on the track at Tipton Sports Academy this week trying to burn a few extra calories when he reaches the summit at the end of his run.

Every claimed to have not watched a minute apart from Andy Carrick who turned up to support the boys who said it was ‘class’. Dan Armstrong apparently ‘watched 10 minutes and turned it off’. Greg Phillpott only watched because of the ‘high calibre’ of ladies on there. More updates next week. 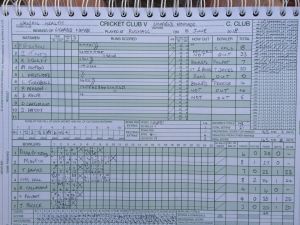