History-making back-to-back centuries by captain marvel Dave Preece provided the cherry on a particularly tasty cake as The Elf bulldozed their way to another excellent win.

Superb notable performances by Ian Chuck (who magnificently carved his way to his first half-century in Elf colours), Matt Wright (who took two catches and two wickets), Chris Hall (whose Lazarus-like recovery continued with a brilliant bowling performance) and Tom Davies (perhaps his best Elf showing with the ball) saw the visitors to a memorable victory.

Winning the toss and electing to bat, The Elf got off to a steady start on a slightly sticky pitch which became a bit livelier as the day went on.

Openers Andy Gorton and Preece were looking good, taking the total to 59 by the 14th over before Gorton was caught off the bowling of Keogh for a credible 22.

This only served to pave the way for the partnership which would see through the total as Chuck went one step further than his encouraging knock the previous week to sail past the half century mark and even threaten to make it to three figures.

Although only 80-1 at drinks, the duo worked through the gears during the last 20 overs to add a further 165 and finish on 245, setting an impressive total and providing Mat ‘Where’s my keys?’ Danks and Rob Hewlitt with severe cases of pad rash.

Such a lofty total was always going to be a challenge for the home side and an explosive performance by The Elf’s strike bowlers Dave Stephens (12 for 2), Hall (10 for 3) and Davies (13 for 1) helped shatter the resistance.

It took the opening pair of Hall and Stephens until the fourth over to see off the Willow opening pair, with Hewlitt and Wright pulling off nifty catches to help the process along.

Hall – in only his second match back in The Elf fold after an enforced lay-off – ultimately grabbed three wickets, clean bowling two Willow batsmen in addition to his opener for just ten runs off his five overs.

The rampant Elf had the home side on the wrack at 27 for five after 11 overs and it required a stubborn seven-over stand by Carl Fenton and Mike Lee to stabilise the collapse, adding 39 runs. 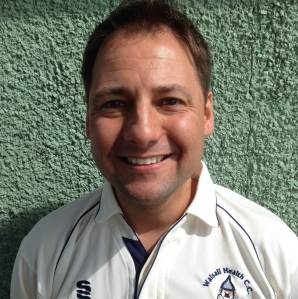 Stuart Slater – good spell of bowling by the squad playboy.

Eventually it was the introduction of Hewlitt that smashed the partnership, grabbing the wicket of the magnificently dreadlocked Fenton (‘FENTON!’) with just his third ball – clean bowled as you like – before Davies produced a brilliant Wales-South Africa combination with Chuck to account for Lee.

With the mid-inning resistance shattered, the wickets came thick and fast with Preece taking great catches from the bowling of Wright (who finished 1 for 2) and Hewlitt (who finished 6 for 2).

A super spell by Stuart Slater effectively opened the way for Wright to arrive and add to his two excellent catches with two wickets in the last over of the game, leaving him on a tantalising hat-trick for when he opens his spell in the next game.

The win represents the seventh victory for The Elf this season and another fantastic showing with everybody playing a contributing part in the win.

* An honourable mention must go to Rich Fell who gallantly fielded for 40 overs (40 TOUGH overs) for the home side after they ended up men down. He then proceeded to bat for them, producing the third highest score, enduring some horrific South African abuse, playing some wonderful strokes to the boundary and avoiding being bowled by Chris Hall.

Man of the match: Ian Chuck

Top bowler: Pick the bones out of the figures above but I point to Matt Wright’s two wickets for one run off five balls. Superb bowling all over the shop. But tough to say.

Rachel Hangover Rating: 8/10 – partly carried over from the previous day when she failed to climb out of bed until 7pm after a day hiding from her hangover.